Local real estate company Rohde Ottmers Siegel Realty, in partnership with
McCombs Enterprises, plans to develop a 24-acre plot in Sequin.
The partnership bought the land, which is at the corner of Texas Highway 46 and
C.H. Matthies Jr. Drive, last year from the John Schaefer Trust and has broken
ground on sewer, water and drainage infrastructure. Yantis Construction is
handling the initial site work, while Villa Park Architecture has designed the master
plan. KFW Engineers & Surveying is also involved in the project.
Initial users have bought portions of the development, including Denver-based
DaVita Inc., which is building a 12,000-square-foot medical building, as well as pad
site users Chicken Express and Burger King. Rohde Ottmers Siegel Realty is
preleasing a 25,000-square-foot retail center that it is developing, which will be
built next year.
"With the explosion of single-family subdivisions in this part of Seguin and the growth in Far East San Antonio [along]
Interstate 10 East …, this intersection will soon host more retail as well as sit-down restaurants, hotels and office
buildings," said Tom Rohde, president of Rohde Ottmers Siegel Realty, in a statement. "The growth between Seguin and
New Braunfels along [TX-]46 is amazing, and for the first time, Seguin is seeing much higher-income families moving into
the area in subdivisions where the homes start at $300,000 to $400,000."
The U.S. Census Bureau reported this year that New Braunfels had the country's second-highest one-year population
growth rate at 7.2%. That growth has spilled over to neighboring Seguin, where more than 8,100 future single-family lots
are being built or planned.
Those 8,119 lots are being built over 27 new subdivisions, said Josh Schneuker, the city of Seguin's director of economic
development. Of those, nine are under construction. The future homes could help Seguin's population grow by at least
half in the coming years. The city's current population is estimated at 29,700, according to the Census Bureau.
"We definitely think this is a spillover effect from New Braunfels. It's getting pretty saturated along the corridor, and we
believe Seguin offers good property at a good price while also being pretty close to San Antonio, offering many of the
amenities you would find along [Interstate] 35 with more reliability as far as traffic congestion in concerned," Schneuker
said.
Schneuker said Seguin is open to more development, and wants to recruit across the entire spectrum of development,
including dining, entertainment and more. 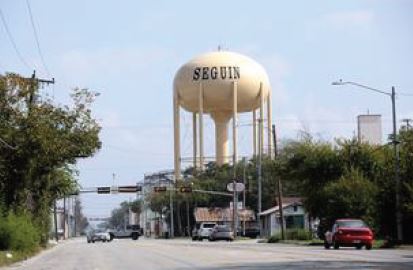